A deep depression over the south-west Bay of Bengal has intensified into cyclonic storm ‘Burevi’.

According to the Indian Meteorological Department ‘Burevi’ lays centred over north Sri Lanka and adjoining Gulf of Mannar, and 310 km east-northeast of Kanniyakumari. It is likely to move west-northwestwards and emerge into Gulf of Mannar.

Here are the latest updates:

Having established 490 relief camps in five districts that fall on the path of Cyclone Burevi, the Tamil Nadu government has made arrangements for accommodating over 1.92 lakh relocated people in these camps, Minister for Revenue and Disaster Management R. B. Udhayakumar said.

On Thursday, the Minister visited Thoothukudi, one of the five districts on the predicted path of Cyclone Burevi and had discussions on the arrangements made with the officials.

Speaking to reporters, Mr. Udhayakumar said 490 relief centres were ready in Thoothukudi, Tirunelveli, Tenkasi, Kanniyakumari, Ramanathapuram and Sivaganga districts to accommodate 1.92 lakh evacuees from vulnerable areas. Twenty of these camps had been created in Thoothukudi Corporation area and 150 persons evacuated from vulnerable areas had been moved to two of these camps.

The Kerala Health department on December 3 sounded an alert in the wake of the cyclone Burevi, which is expected to hit the state on December 4, and said all precautionary measures were taken to meet any emergency situation.

Health Minister K.K. Shylaja said the alert was issued to effectively combat various health issues caused by the cyclone and rains and the subsequent epidemic.

Director of Health and Director of Medical Education have been instructed to ensure sufficient medical facilities and medicines in State hospitals.

Cyclone Burevi has not caused much damage but its after-effects will last for another 24 hours, the country’s meteorological department said on Thursday.

Districts in the island’s north and east received as much as 200 mm of rain. However, its impact was less than what was anticipated by the officials.

Incidents of flooding and tree felling were reported but property damage has largely been contained.

In a flash flood in Trincomalee district, 12 houses were submerged. Over 630 families were accommodated in temporary relief camps, while over 1,700 families made personal arrangements in safe locations.

In northern Vavuniya district, around 250 families had been evacuated, officials said.

Owing to onset of Cyclone ‘Burevi’ the following Trains are Partially Cancelled:

Train No.02693 Chennai Egmore – Tuticorin Special is partially cancelled between Madurai and Tuticorin

Train No.06236 Mysuru – Tuticorin Special is partially cancelled between Madurai and Tuticorin

Train No.02694 Tuticorin – Chennai Egmore Special is partially cancelled between Tuticorin and Madurai

Train No.06235 Tuticorin – Mysuru Special is partially cancelled between Tuticorin and Madurai

As Kerala remains under high alert expectingheavy rains and winds as result of cyclone Burevi, Chief Minister Pinarayi Vijayan on Thursday called for a high-level meeting of the State Disaster Management Authority (SDMA) and other departments.

The NDRF team, which had reached Kerala, has inspected the hilly regions and the coastal areas of Thiruvananthapuram.

The Fire and Rescue team has been engaged in cutting and removing trees and branches which pose danger to the public in case of heavy rains and wind.

Several parts of Tamil Nadu’s delta region witnessed heavy rainfall, especially Nagapattinam and Tiruvarur districts. Vedaranyam recorded the maximum rainfall of 20 cm of rainfall during the 24 hour period ending at 6 a.m. on Thursday. Fishermen of Vendaranyam abstained from venturing into the rough sea.

Most other parts of the district including Talaignayar (15 cm); Nagapattinam (14 cm), Mayiladuthurai (12 cm), Sirkazhi (10 cm), Manalemdu and Kollidam (7 cm each) and Tharangampadi (5.5 cm) received heavy rain. Neighbouring Karaikal in Puducherry Union Territory recorded 16 cm of rainfall during the same period.

“So far, the rain has been beneficial. There is water logging is some fields in low-lying areas in the district, but the water will drain quickly even if there is a brief let up in the rain. We are relatively safe as long there is no heavy rain flow in the rivers and canals from Karur, Namakkal and Tiruchi districts,” observed Cauvery S. Dhanapalan, general secretary, Cauvery Farmers Protection Association. He appreciated the Public Works Department for good water management this year, — suspending water release in the rivers and canals in the delta well in advance of the monsoon rain.

A seven-year-old girl died in a wall collapse in Perambalur district, in the early hours of Thursday, even as several parts of Tamil Nadu’s central region received heavy rainfall since Wednesday, under the influence of the cyclonic storm Burevi.

The victim, V. Yosana, was asleep with her parents in a tiled house at Pasumbalur village when a portion of a mud wall, apparently weakened due to the rain, fell on her, causing her death on the spot, said the police. The girl’s father Venkatesan is a daily wage labourer. The body of the girl was sent to the Perambalur Government Hospital for a post-mortem. V. Kalathur police are investigating.

Normal life was disrupted in Puducherry on Thursday as torrential downpour influenced by Cyclone Burevi pounded several parts of the Union Territory.

Tanks were getting copious inflow and the level of water was rising, leading to fast recharge of sub soil water.

The territorial administration has sought ₹100 crores as interim relief from the Centre as the loss incurred due to cyclone Nivar and heavy rains was pegged at ₹400 crores.

‘No major damage’ in  Sri Lanka

Authorities in Sri Lanka had evacuated more than 75,000 people, most of them from the Trincomalee area, before the Burevi cyclone hit.

But Mr. Kodippili said cyclonic conditions were still prevalent in the north with heavy rains and strong gusts of wind and that naval and fishing communities had been asked not to go out to sea.

The IMD said it expects damage to thatched huts, and that power and communication lines could be affected due to breaking tree branches. It also expects the storm to hit paddy crops, banana, papaya trees and orchards.

The IMD’s warning comes after Burevi’s packing winds of up to 90 kph (56 mph) hit Sri Lanka late on December 2 but with little fallout. 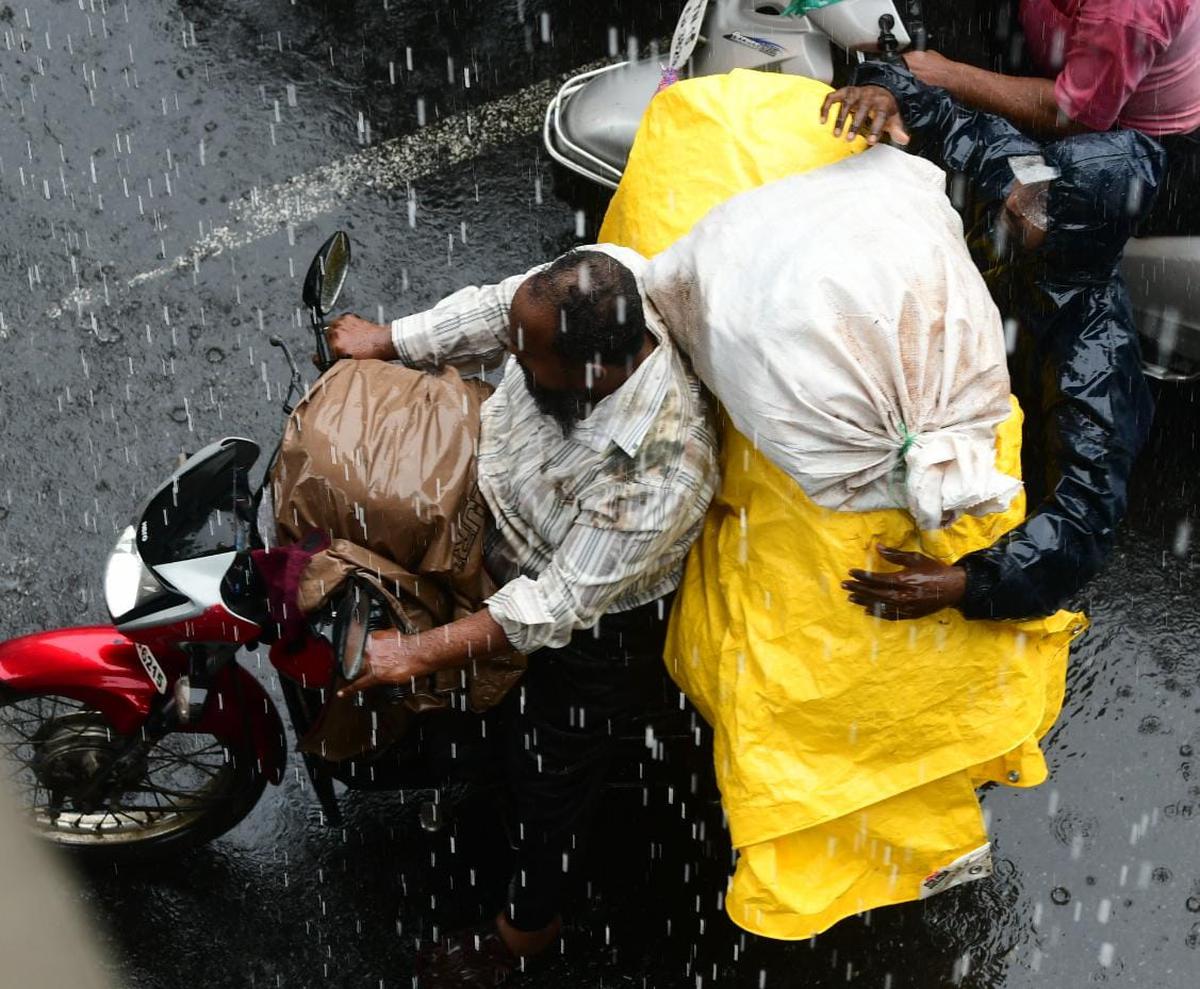 The storm over north Sri Lanka with a wind speed of 70- 80 kmph gusting to 90 kmph would be centered very close to Pamban around noon on December 4, the department said.

“It would then move nearly west-southwestwards across Pamban area by afternoon and cross south Tamil Nadu coast between Pamban and Kanniyakumari,” the IMD said on its twitter handle.

Under the influence of the weather system, regions including those falling under the Cauvery delta zone like Kodavasal in Tiruvarur district, Nagapattinam, Vedaranyam, Karaikal, Tiruthuraipoondi and Mudukulatur in Ramanathapuram received rainfall between nine cm and a maximum of 20 cm since last night and till this morning.

‘NDRF team ready to serve and save’

Director General of National Disaster Response Force S.N. Pradhan tweeted that the NDRF team has reached all locations and are ready to serve and save.

He shared the map of where the NDRF teams are located and available in order to facilitate administration and to help citizens. Union Home Minister Amit Shah said the Modi government is committed to provide all possible help to the people of Tamil Nadu and Kerala in the wake of Cyclone Burevi’s impending landfall along the southern coast.

This was conveyed by the Home Minister to the Chief Ministers of Tamil Nadu and Kerala Edappadi Palaniswami and Pinarayi Vijayan, respectively, during telephonic talks.

“Have spoken to Tamil Nadu CM Shri @EPSTamilNadu and Kerala CM Shri @vijayanpinarayi in the wake of Cyclone Burevi. Modi government is committed for all possible support to help people of Tamil Nadu and Kerala. Several teams of NDRF are already deployed in both the states” Mr. Shah tweeted.

Chennai Corporation has issued flood warning to residents of neighbourhoods along the banks of Adyar river following the release of water from Chembarambakkam lake.

According to a press release from Greater Chennai Corporation Commissioner G.Prakash, all teams are ready at the lake to give minute-to-minute feedback and to open shutters as per need. “It’s only general alert and to exercise caution amongst the people on the areas nearby.” said Mr.Prakash.

Kerala has been put on high alert given the possibility that Cyclone Burevi is likely to pass through Thiruvananthapuram district.

People should not venture outside unless absolutely necessary from Thursday to Saturday, he said. So far 175 families (690 people) have been shifted to 13 camps, he said.

Eight teams of the National Disaster Response Force (NDRF) have been deployed in the seven southern districts.

Prime Minister Narendra Modi spoke to Chief Minister Edappadi K. Palaniswami on Wednesday, over phone, to discuss the situation emerging due to Cyclone Burevi, and assured the State of all possible support from the Centre.

“Had a telephone conversation with Tamil Nadu CM Thiru @EPSTamilNadu Ji. We discussed the conditions prevailing in parts of the State due to Cyclone Burevi. The Centre will provide all possible support to T.N. I pray for the well-being and safety of those living in the areas affected,” the Prime Minister tweeted.

(With inputs from Agencies)